For more than 50 years, Sylvia Porter was a financial columnist who dispensed middle-class investment advice. She began her career in the 1930s under the byline S.F. Porter to conceal that she was a woman, but in time she began to use her full name, which eventually became synonymous with no-nonsense advice written in plain English for everyday folk. At her peak, she reached some 40 million readers in more than 450 newspapers around the world. 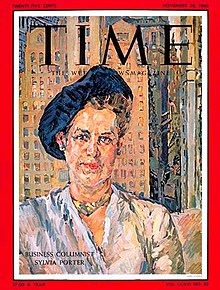 Despite her fame, I had never heard of Sylvia Porter until recently. Why is that? I wanted to learn more.

I bought an original hardback of her 1975 magnum opus, published a year before I was born: Sylvia Porter’s Money Book: How to Earn It, Spend It, Save it, Invest It, Borrow It—And Use It To Better Your Life. With more than 1,200 pages, the book is as big as its title. It’s hard to imagine a mass-market personal finance book of this scope published today. But Americans in the mid-‘70s were a different bunch, I guess, because the book sold more than a million copies.

Before I dove in, I needed some historical context about 1975.

Nixon had recently resigned, and Gerald Ford was president. The ’73-’74 recession was ending, but the unemployment rate was still high. Inflation was a dizzying +9.1%. The S&P 500, after two consecutive negative years, delivered a whopping +37.2% total return. The No. 1 single on Billboard’s Top Hot 100 was “Love Will Keep Us Together” by Captain & Tennille. Norman Lear dominated TV with hit shows like “All In the Family” and “Sanford & Son.” My mother drove a yellow AMC Pacer.

Porter’s book begins with a rather Darwinian foreword: “The American marketplace is an economic jungle. As in all jungles, you easily can be destroyed if you don’t know the rules of the survival.” I felt like I was embarking on a safari. With you as my guide, Sylvia, I will not fall into any dangerous traps. I will not be destroyed.

The book covers a lot of terrain: how to make a family budget; how to save money on groceries, cars, weddings and vacations; how much a husband-to-be should spend on a wedding ring (no more than three weeks’ salary); how to plan for your estate; how to claim Social Security; and, of course, how to invest your money.

Her writing style is conversational, like a friend who’s right there in the room with you, talking with you over a cup of coffee or maybe a glass of wine. Her advice can be incredibly detailed and specific. For instance, this little nugget: “Don’t, unless it means a big sacrifice to you, go into the hospital on a Friday.” That will result in a longer and thus a more expensive stay. Rather, the best day to be admitted to a hospital is on a Tuesday.

Porter astutely observes the habits of a changing America. For instance, she notes an increased prevalence of Americans ordering takeout rather than making dinner at home, as well as more people working from home rather than going into the office. With Roe v. Wade just a few years decided by that point, she emphasizes the importance of family planning and how to use your insurance coverage for abortions and vasectomies.

Presciently, in one section of the book, she predicts that one day, “not off the edge of the horizon,” we will be able to order our groceries from the comfort of our home using a “picturephone.” The groceries will be delivered directly to our door and everything will be paid for electronically. How did she see that coming?

Porter understood the importance of investor psychology as it pertains to successful outcomes well before our industry began to embrace that idea. When it comes to investing in the stock market, she writes, “You must have the emotional temperament to own stocks.” She goes on to say that “if you are so nervous about owning stocks that you can’t take a trip without worrying about what is happening to your stocks, stay out of the market.” Yes, indeed.

After the publication of Sylvia Porter’s Money Book, she remained prolific for the rest of her life. Her last book, Planning Your Retirement, was published just after her death in 1991 at the age of 77.

It’s puzzling to me why I’ve never heard anyone in the financial services industry talk about Sylvia Porter before. How can a woman with that long of a career—a woman who boldly entered a predominantly male profession, who wrote scores of books and articles, who spoke truth to power, including to a senator and a secretary of the treasury—how can a woman like that barely (if ever) be remembered by our industry?

I’ve concluded that the answer to my question is an obvious one: The financial services industry is still male-dominated and still prefers to remember the accomplishments of other (mostly white) men. But for me, for my practice and for my clients, I want to change that. I want to start celebrating the women of finance—both the great women of today as well as the great women of yesterday. You have to do a little digging to find them, but they’re there. Waiting to be (re)discovered, as Sylvia Porter was for me.

Bray Creech, M.B.A., CPA, is a certified financial planner professional with Joel Adams & Associates with securities offered through Raymond James Financial Services Inc. He can be contacted at 828-251-9700 or bray.creech@raymondjames.com.

we would love to meet!